Some viewers and followers may know or may have surmised that, before getting married, I spent a few years in a monastery, completed monastic and seminary formation, and became a solemnly professed  – no, not Solemn Vowels, ordained monk.

A funny thing happened on the way to mass one day. About 30 or 40 of us concelebrants were processing in and singing the opening hymn. Everyone properly intoned the first phrase of the hymn, Morning has broken, but someone behind me changed the next few words, as shown in the drawing, and sang it loudly enough for those of us in his sound shed to hear easily that he had referenced Fr. Frank, who at the time was the Director of Physical Plant, the only person on Earth capable of fixing a broken morning… for Christ’s Sake. 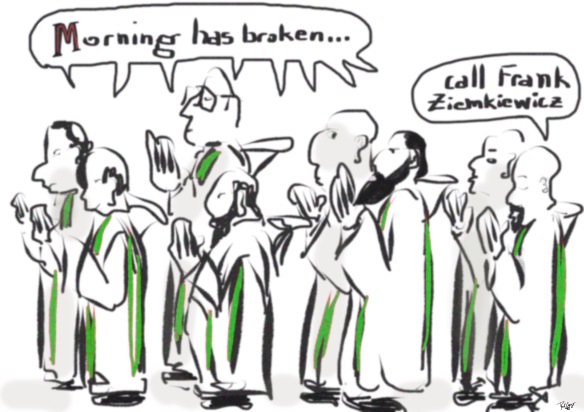 For fun, have a listen to a traditional version of this hymn or better yet, check out this rendition by Cat Stevens a.k.a. Yusuf Islam.

Did you catch the spelling error on the first rendition of this drawing?

This site uses Akismet to reduce spam. Learn how your comment data is processed.